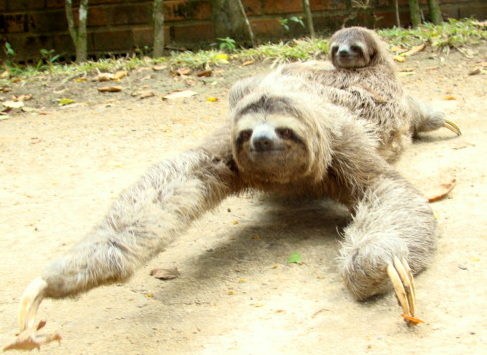 If ever an animal captured the principle of “maximising work not done”, it must surely be the sloth.

Strangely endearing and charmingly enigmatic, sloths are surprisingly inspiring. There exists a Sloth-Club which was formed “to promote slothful behaviours” such as ecology, economy and vegetarianism in order to live in better harmony with the earth.

Scientists seem to be irresistibly drawn to sloths and they’ve been in the news twice in the past four months. First with the discovery that their internal organs hang from their rib cage allowing them to breathe when upside-down and when right-way up. Although, since their preferred elevation is hanging from a tree, maybe that should be described as downside-up. Then came the discovery that their fur was itself a miniature ecosystem. It comprises a nutrient-laden algae which they can suck to supplement, or perhaps enhance, their diet of leaves. As well as algae, its fur is home to a species of moths that disembark the sloth after it descends to the ground. This it does weekly to go for a poo. How efficient that is. The animal stays in the tree canopy all week long and comes down only when it needs to “go”. Other creatures simply “go” in the trees but the eco-conscious sloth helps its moth dependents by carrying them directly to its latrine, where they alight and are able to help themselves to the proceeds. Sloth, moth and forest all benefit from this arrangement.

So much for the science. What agile lessons can we learn from the sloth? 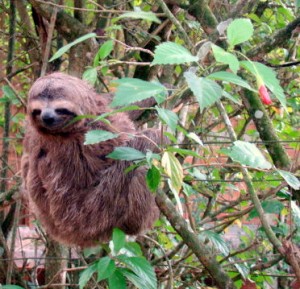 I watched a sloth recently, a three toed sloth, in the Atlantic rain-forest of north eastern Brazil. It is a curious animal, one that even locals who a familiar with them in their gardens, enjoy watching. Even more so when the animal in question is carrying its cub, who clings-on to her mum, efficiently learning slothful behaviour.

The sloths I saw were a little shy, tending to work their way through the branches away from spectators, in much the same way that people prefer not to be watched when working. They move constantly and the movements are perfectly fluid. Utterly effortless and unhurried, constantly testing and assessing where to shift their grip, rather like a climber feels with his feet for footholds.

They know where they want to get to, and always move towards their goal. They are always testing and make one move at a time

The sloth has a single-minded determination that is quite surprising. It makes its way through the canopy of the thin tree stems and branches in a manner that reminds me of Agile. It knows where it wants to go but isn’t certain of how it will get there. Its progress is unstoppable. No matter how thin the branch, or how large the gap, the Sloth is able to find its next move, and the next, until it ends up where it decided it needed to be.

It has physical advantages too. It is very light in weight – I’ve had this confirmed by someone who has held one, and you can see by the slight bend of a branch on which sloth hangs, that the creature is mostly made of fur and charm. It has a very small head. Which presumably means a small brain, which in turn, and I am leaping to conclusions here, allows it to hold only one objective in mind and not to be distracted by sudden “bright ideas” or “on the other hand” arguments, or three good “reasons to do it later”. Maybe that brain is totally occupied by: test, move, test, test, move, test, hang, test, move, look away from man with camera, test, move…