Targeting Your Investment in Agile

Over lunch on the first day I was talking to Christian about the issues many clients are facing and he asked me if I had seen James Shore and Diana Larsen’s Agile Fluency Model, check it out here. I hadn’t. But I have now, and what an eye-opener it is! 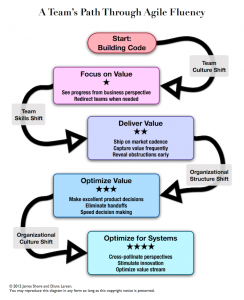 First, let’s park one possible misconception. What James and Diana have presented is not (another!) “Agile Maturity Model”. The point is not to badge Agile teams with one level of maturity (or indeed immaturity), or another. But to provide a guide to teams and organizations about where are with the Agile approach, where they want to be, and what are the trade-offs in terms of costs and benefits that have to be considered in meeting their targets.

For consultants like ourselves and for training organizations, it helps focus our efforts with our clients in helping them overcome any impediments they are facing.

Fluency is measured by what teams do when under pressure. It’s what their “muscle memory” is. Fluency is not gained by merely knowing certain techniques, but by practising them intensively over time.

The Model uses a star system that goes from 1-star, rising to 4-stars. James Shore has described a 1-star Team as one that is using the fundamentals of Agile. From the perspective of Scrum that would mean that the mandatory rules of Scrum are in place and are being operated.  Then again, it might be that Kanban is being used, for example, if the team is not a Scrum Team. The test of whether a team is at least at the 1-star level is whether they have changed team culture to the point that they are business value-driven in their process and can change direction when needed. It typically takes a team from between 2-6 months of practicing their chosen Agile approach to become a 1-star team.

Sustainability in Agile requires 2-star Teams. Big investment in skills is needed for teams to be 2-star teams. Test-Driven Development, Acceptance-Test Driven Development and Continuous Integration are typical practices. The common theme is that these are the kinds of skills that eliminate the drag of technical debt, allowing the team to be truly responsive to change. 2-star teams typically identify impediments, dysfunctions and issues early, and are quick to remove them. They are characterised by an ability to ship on “market cadence” – i.e., to deliver value as soon as the market is ready to accept it: the ability to ship at will.

The model’s authors point out that many organizations will be satisfied at achieving 2-stars. Shore has since commented that most  large, bureaucratic organizations – the kind that have heavyweight managerial cultures and legacy IT issues – will probably be unable to go further. See J Shore (2013). “Your Path to Agile Fluency,” NDC Conference presentation (vimeo.com/68327316).

But even getting to 2-star demands a price. The kind of intensive skills training required, together with the task of eliminating the previously accumulated technical debt will almost certainly cause a drop in the team’s productivity while they are up-skilling. How fast they can become a 2-star team depends on the existing level of technical debt, but it can take a further three months to two years of training, mentoring and, above all, intensive practice before the necessary muscle memory is acquired.

Shore describes 3-stars as the level of “Agile’s promise”. In a rather damning aside he has stated that Agile promises 3-stars, but more often than not, has delivered only 1-star teams.  3-star teams are characterized by the level of business domain expertise that is embedded in the team itself. They deliver higher value than other Agile teams and make better, business value-driven decisions about the product.

In retrospect many of the practices we were discussing at the Product Owners’ Survival Camp are of the kind that would be routine for 3-star teams. Chris Matts’ Feature Injection (C. Matts and G. Adzic 2011 “Feature Injection: 3 Steps to Success”)  describes an approach that helps teams “hunt the real value”. For example, while Gojko Adzic’s Impact Mapping (G Adzic. 2013. Impact Mapping. Making a Big Impact with Software Products and Projects – Provoking Thoughts Limited) allows the team to test assumptions in the business case for the product by shaping and releasing Minimal Viable Products that can provide quantifiable feedback with concrete business metrics. Such teams are equipped to be vastly more responsive to changing market conditions and business priorities than 1-star or 2-star teams.

Only about 1 in 20 Agile teams are thought to be at this level (45% of teams are 1-star and 35% are 2-star), and it might take a team an additional 1 year to 5 years to reach it (if indeed that is the target it has set itself). The issue is that structural changes in the wider organization are needed for this to happen, and this always engenders some level of resistance. How quickly a team might move to 3-stars depends on how willing the organization is to remove the impediments in its way, as much as it does on the team establishing new practices as part of its daily routine. Most of the teams currently at this level are in relatively small, entrepreneurial organizations.

If 3-star is the (largely unfulfilled) promise of Agile, then 4-star is largely aspirational. It represents a potential future for the Agile Model and there are only a handful of teams at this level right now. 4-star teams are peer-decision makers with the entire organization focussed on how to deliver business value. You might say that they are applying “Agile Enterprise Architecture” in full partnership with everyone else in the wider organization. Most of the teams at this level are in small, single Team organizations, although Shore has suggested that Semco, the Brazilian manufacturers; the US games company Valve; G.L. Gore, the makers of Gore-Tex; and, GitHub are potential hosts of  4-star teams. Nevertheless, there is not enough experience in the industry yet to say how a team might get from 3-star to 4-star, or how long it might take.

Most 3-star teams will not even aspire to the 4-star level and this is the beauty of the Agile Fluency Model. It is not promoting an “OK, better, best” scale that managements will use to whip their software development teams. Perhaps 15% of Agile teams are not even 1-star teams yet (maybe they have just started their Agile journey) and they should certainly seek improvement.

But, beyond that, every level is the right level for some teams. My guess is that most will aspire to at least 2-stars, and the Model shows what the investment focus should be, and what the costs that will likely need to be paid to get there. It also demonstrates very clearly, that 3-star and 4-star teams cannot be grown without significant structural and cultural change in the wider organization which in turn often implies a change in management’s mind-set – even if it was management which initiated Agile adoption in the first place.

Alan O’Callaghan is a member of Storm’s Consulting network and is a leading contributor to the international development of Agile.